Marjorie called DryZone after seeing an ad on TV back in 2013. She was living in a 200-year-old home in New Bedford that would get wet during storms. She had an inspection and feared she could not afford the work that was necessary to keep her whole basement dry. Her original inspector explained to her the options we offer for financing and she said she was going to hold off. We kept in touch with Marjorie for years, checking in after every rainstorm to see if she was ready to stop dealing with the constant water problems in her basement.

After a particularly bad storm in 2017, we reached out to Marjorie to see if she was ready to take that step to waterproof her basement. She said how exhausted she was because she spent hours in her basement drying it out. She had emptied 63 18-gallon buckets (and that was with two sump pumps running non-stop!) She explained that she is a 63-year-old retired veteran of the United States Army and she is so sick of getting home from her appointments at the VA to take care of water in her basement. We sent out another inspector since the original one had since retired and he recommended she take care of this issue once and for all and enjoy her free time doing things that she loves to do.

Steve Greco went out to meet with Marjorie and he recommended a full perimeter WaterGuard system with a TripleSafe and a SaniDry XP.

The WaterGuard is a system of pipes that are specifically engineered to solve basement water problems. The drain is designed to prevent clogging from soil, clay, and sediment underneath the floor. It intercepts water at the perimeter of your basement and drains it away to a sump pump, unseen. There is even an inspection port built into the system so any potential clogs can be caught by simply removing the lid and taking a look!

All the water from the WaterGuard drains to the TripleSafe Sump System. It is the world's most reliable pumping system; keeping your basement dry with triple the protection. A sump pump is essential for any basement waterproofing project but not just any sump pump will do. There are three problems that can arise when using anything but the TripleSafe. Those three problems are pump failure, a single pump cannot keep up with the volume of water and power failure. The TripleSafe addresses all of these problems with a primary pump, a secondary pump and a battery back up.

Finally, the SaniDry XP is an energy star rated, self-draining dehumidifier and air purifier. When installed in conjunction with a full waterproofing system like we did for Marjorie, it can drastically reduce the musty smell in the basement. Marjorie is pleased and is looking forward to enjoying her retirement without worrying about the rain anymore! 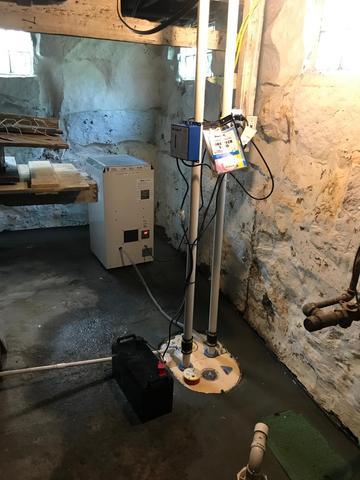 The SaniDry XP is draining into the TripleSafe. The black box is the battery for the UltraSump (battery back up) 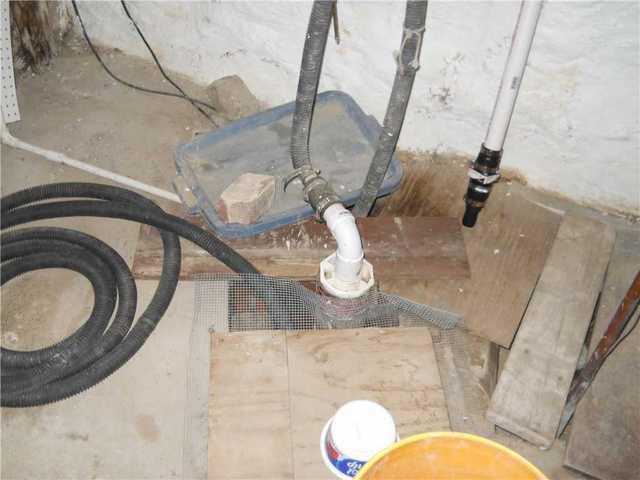