Paul W. contacted DryZone Basement Systems because he was looking for french drain in his basement. After scheduling his free estimate he learned that the water was caused by a contractor leaving a hose on that trickled into the basement. He decided to keep his appointment with DryZone because even though his initial problem was not caused by ground water, he didn't want to have to deal with a problem like this coming up again. His system design specialist, Jay, came out to look at the basement. It was clear what Paul needed was a whole new concrete floor, Paul agreed. The next step was to have Todd come out and double check everything. Prior to starting DryZone Basement Systems ten years ago, Todd was pouring concrete. He is our expert!

After many months of negotiation with insurance companies, we were finally ready to start this waterproofing project. First, the crew, lead by Head Foreman, Ricky, jack hammered trenches along the perimeter of the foundation wall. Next, CleanSpace Wall was added which will divert any moisutre attributed to a New England home with a field stone foundation into the WaterGuard drainage system without ever being seen in the basement. Next, the WaterGuard is dropped into the trenches and the CleanSpace Wall is tucked behind the flange.

We also drop the TripleSafe sump pump liner into a pre-dug hole. After that, we come in with barrels of clean, crushed stone and cover the drainage pipes and around the sump pump liner. This adds an extra line of defense that stops any large rocks or sediment from making its way into the sump pump liner and the WaterGuard which could cause a clog in the future. In this case, a vapor barrier and mesh wire was laid down for yet another defense against moisutre. The wire mesh adds added stability and strength for the new concrete floor. On the fourth day of the project, the pump truck came and the floor was poured. Paul was incredibly happy with the results and was thrilled that he decided to call DryZone. 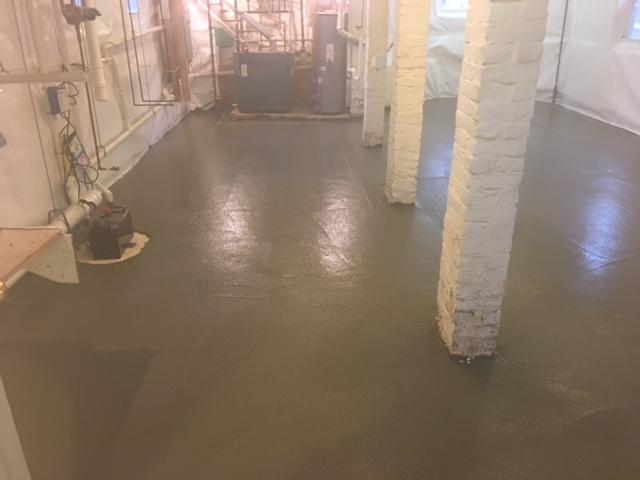 Photo Gallery: Pre-Construction Waterproofing and Floor Pour in...
Back to Previous Page
Back to Case Studies