This customer in Great Barrington, MA contacted us back in 2013 originally when she had just purchased the home. She was experiencing humidity, mold and odors in the basement as early as a month after moving into the home. The basement didn't have standing water or a sump pump and she wasn't sure much detail regarding the foundation. We came to take a look and recommended a sump pump as well as our WaterGuard Sub-Floor Drainage System. We have continued to service our products ever since and recently while on an annual service call we investigated what appears to be some sort of black bacteria in the basement. We will be returning to her home soon to do some more work and ensure the black "gunk" for lack of a better work has been remedied efficiently. 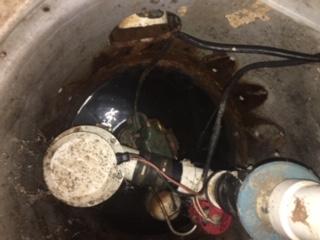 Black bacteria buildup in this sump pump is more than likely the result of a clog in the WaterGuard Drainage System- caused by tree roots in the port. 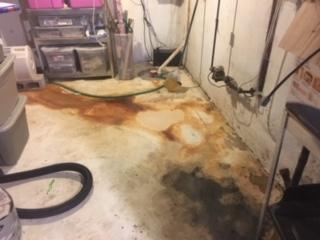 Our customer here in Great Barrington, MA was very concerned about this staining on the floor of her basement. We believe it is a bacteria buildup from a clog in the WaterGuard. We will be returning to finish up the work here to flush the system and be rid of this bacteria. 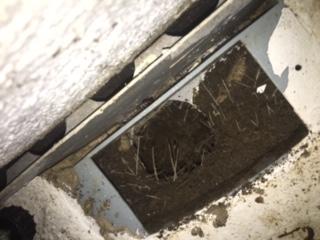 These roots may be clogging the WaterGuard Drainage System thus causing the bacteria buildup in the basement and sump.