His inspector, Derek Rice, went out and met with Cameron's finace and took measurements and pictures. After receiving his quote from Derek, the homeowner decided he wanted to sit down and have the solution explained to him. During the second visit some things were changed and he was ready to sign the proposal and start the work!

The entire crawlspace was getting a makeover.  A full Cleanspace encapsulation, installed by foreman Ricky DeOliveira, co-foreman Rene Gonsalves and helper Matt Bezarro. TerraBlock was installed under the CleanSpace. TerraBlock is a flexible foam insulation board that has a vapor barrier on both sides. It insulated the floor of the crawlspace. We also installed SmartJacks to stabalize the foundation. The rim joists were air sealed with spray foam, installed by our spray foam expert, Matt Bezarro. The final touch is the SaniDry CX dehumidifier. It removed moisture and humidity from the air while purifying the air at the same time.

Cameron was very happy with the whole process from start to finish! 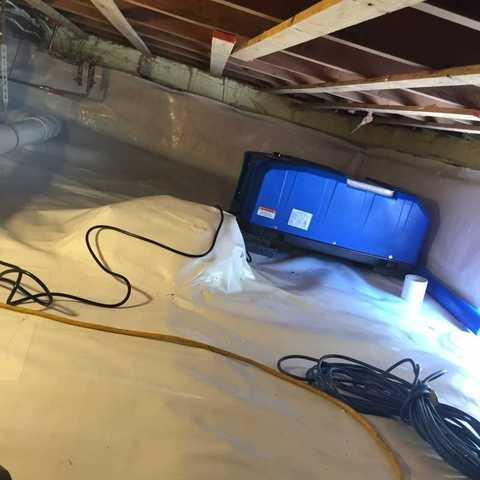 SaniDry CX sits on top of the CleanSpace